For a hot second during quarantine Hulu had a bunch of old Bond movies up and my husband and I could not get enough.

Old James Bond movies are terrible. They’re slow, the plots are dumb, the special effects are obvious, and the fight scenes are super awkward. They’re also EXTREMELY racist. Like, next-level offensive. To women too. Every time we watch an old one, I have to ask myself why in god’s name I still love this character when he’s such an epic schmuck.

And the answer is because all this was invisible to me when I watched my Bond.

Each generation has a Bond. My Bond was the Pierce Brosnan Bond.

[The Daniel Craig ones are another beast entirely which has a whole backstory. TLDR: Craig wouldn’t agree to the films unless they made the character more dynamic, so his version of Bond is a welcome and intentional departure from the rest. Still a schmuck, but a complicated brooding one with a heart-filled backstory].

When I was 11, I had zero concept of how much was manufactured. Like obviously it was fiction, but the fabric of what made it work – the social dynamics, the chauvinism, the objectification, the hero complex, the helpless female, the bad guys being not-American – they fit into my existing worldview (or the one I was raised in). So they were invisible to me.

They fit into my worldview, so they were invisible to me.

The ones from the 50s were obviously chauvinist, because I didn’t ascribe to that worldview. The ones from the 2000s seemed progressive because they were aligned with what I believed and how I saw the world (or rather, how I expected the world to be).

The reason I think it’s important to watch old Bond movies (and old movies in general) is because they’re a snapshot of a moment in time. Even with all that’s manipulated and manufactured, you get a glimpse into what people value.

Media is a mirror.

This idea that EVIL ADVERTISERS AND MEDIA CONGLOMERATES are actively plotting to make us hate our bodies, encourage racism and misogyny, and uphold impossible beauty standards – is incomplete (and frankly, giving them way too much credit).

This kind of conspiratorial thinking is keeping us from making actual progress on these issues.

When I worked in CPG (consumer packaged goods, so like stuff you find in a grocery store) we had frequent discussions on the facts of shopping. The ads we created were a mirror of what we found in the market, not the other way around (Advertisers aren’t absent any culpability, but there’s something bigger going on).

Here’s an example of some facts that came out of research:

So, when you see Windex ads targeting women, that’s not because there’s an evil conspiracy to move feminism backward. It’s because the campaign targeting men to buy Windex didn’t sell shit. So, you feature women in your ads so you sell more.

There’s no evil conspiracy, it’s way worse: there’s no thought given to this at all. It’s people reacting to data. As the data has evolved (because WE have evolved), the ads evolve. You see more inclusive ads because culture has become more inclusive and a little (a LITTLE) less racist.

It’s also become “cool” to be inclusive (hello, Dove, we see you). And by “cool” I mean profitable.

Ads are a mirror, not an agenda. 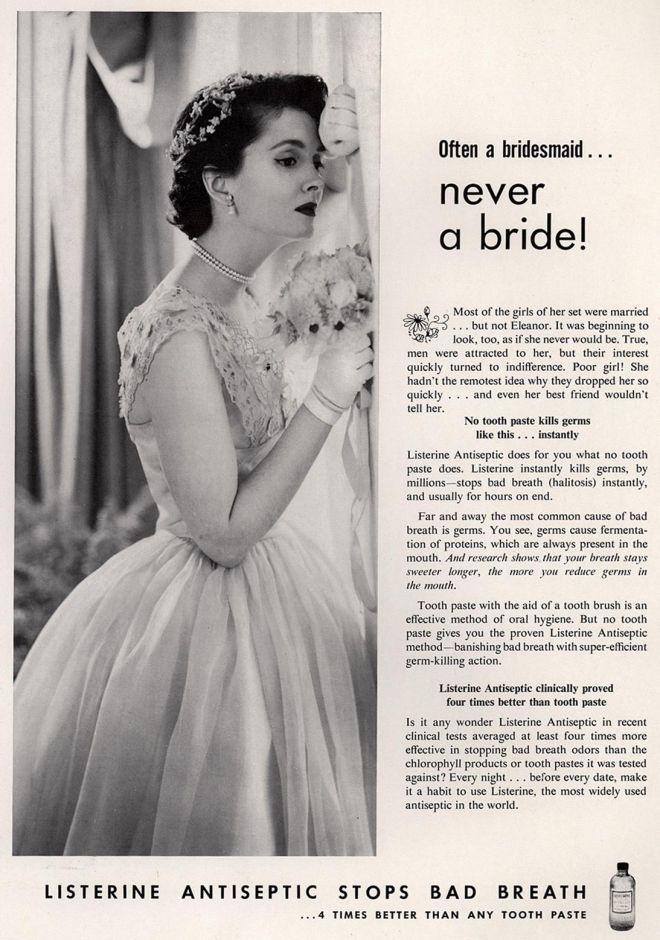 This is an ad for Listerine. The “big idea” is you’re not married because your breath smells like shit. It only works if we all agree that a woman’s aspiration is to be married.

We see plenty of similar messaging in ads today, but it’s not nearly this blatant because this is not how we talk. We live in a culture where we encourage women to have careers, and quietly judge them for not being married.

The desire hasn’t changed. How we talk about it has.

Take a look at ads targeting women now and you’ll see a similar theme. Be pretty, thin, and well dressed and attract the right mate (or be the perfect wife and mother). We have evolved ZERO (more on that here).

I’ll skip over my history psych lesson and get to the point:

You can’t talk about ads without talking about culture.

Media is a huge problem, I’ve made no secret of my thoughts on this. But to place the blame on “evil” advertisers and “evil” media conglomerates (*cough* FACEBOOK *cough*) is to take no responsibility for culture’s own role in all this and our role in creating culture.

Placing the onus on consumer behavior is likewise nearsighted and oversimplified.

In graduate school, they taught us that when it comes to psychology, the “nature vs nurture” argument is a moot point. It’s both and it’s complicated. So too, when it comes to advertising and culture:

It’s both and it’s complicated.

Until we can sit with that reality, I fear we will make no progress.

You cannot see what is invisible. But you can start to make the invisible visible.

I’m tired of hearing people complain about the state of the world and then continue to produce and consume the crunchy-solutions SEO-friendly answers to things.

That’s not how we will fix this.

To make the invisible visible, you have to concede that you have a worldview that’s influencing your perception in the first place. You have to learn to see.

So, go read some old ads. Watch some old TV. Stop looking for someone to blame for what’s wrong and start asking how we got to here. Start asking where WE are propagating and upholding the very things we seek to destroy.

Then we can talk about blaming advertisers.