The Definitive Guide To Sexy Failure: How To Know If Your Failure Is Good Enough

My mom was sick and I was barely making rent. We lived with 2 kids in a basement while also trying to pay off $600k in student loans. As if that wasn’t enough, I broke my arm and had to max out all my credit cards just to pay the medical bills.

This is “sexy failure.”


Sexy failure it the kind of failure that we like to brag about. It leads to speaking gigs and FastCo features and Marcus Lemons handing you a check.

If you’d like to earn respect among the titans, show us your sexy failure. WE WANT TO KNOW HOW FAR YOU FELL!

But just the sexy parts. The parts where you picked yourself up, beat the odds, fought against adversity.

We don’t want to hear the truth, which was probably more like:

“I lacked the confidence to click send on these outreach emails. Then I did. And nothing happened so I had to do it again the next day!!! <— repeat for 50 days.”

No FastCo editor is gonna want to print that boring ass story.

HOW FAR DID YOU FALL THE PEOPLE WANT TO KNOW

And then we will rank your fall to determine if you fell hard enough: 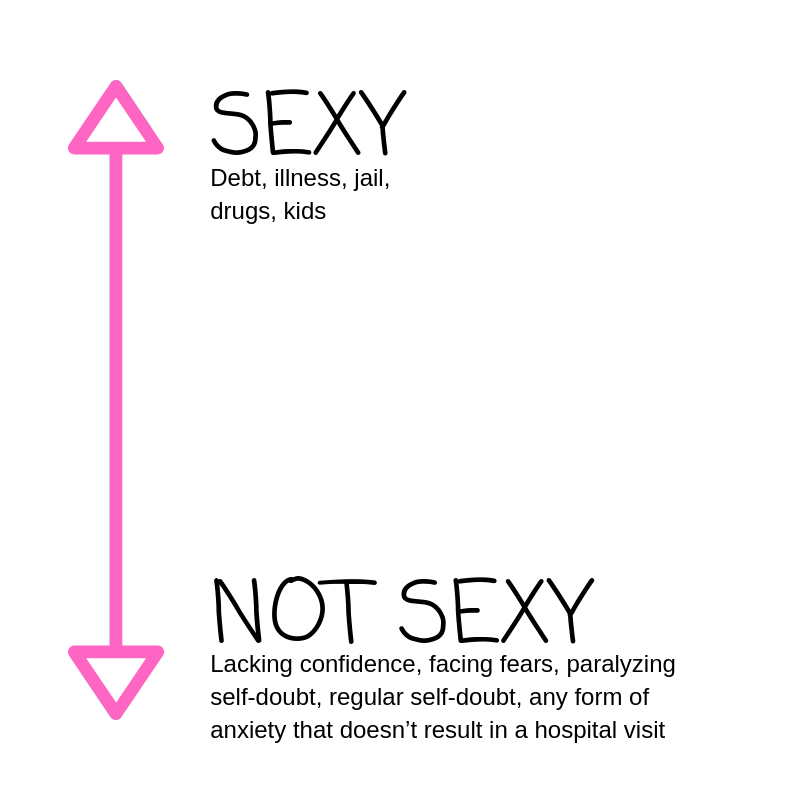 (Not pictured: The middle which includes learning disability, accident, product failure, business failure. These are middle-sexy items that are allowed to be on your About page)

So, here’s the problem with this ranking system besides the obvious WTF THIS IS SO DUMB-ness of it.

You can’t rank order someone’s pain. Or failure or setbacks or problems.

That’s where we get our epidemic of internalized shame which is probably what you felt when you read the opening paragraph of this email.

“Shit. She’s really gone through a lot. What am I complaining about?” <<—— THIS IS NOT OK PEOPLE

The problem with rank-ordering suffering is that it causes us to dismiss and discount our problems as unworthy, which means we never actually get the gift of facing them. Because we don’t believe they’re real problems.

The belief that “sexy problems” are the only real problems is fucked up on a scale I can’t even begin to tell you.

Your problems are real problems no matter what they are or how they net out on the stupid made up sexiness rating scale.

Having a laundry list of sexy failure tells you nothing about how that person experienced that failure.

Failure doesn’t have to be impressive or FastCo worthy to be debilitating and real. In fact, it’s precisely that type of unsexy, unimpressive failure that scares me so much.

When you hit “Rock Bottom,” your Rock Bottom Alarm goes off with bright flashy lights and noises so you don’t miss it. You know when you’ve hit Rock Bottom.

You don’t know when you’ve hit the other stuff because it doesn’t even register as a failure or setback. It’s “par for the course” or so they say, I dunno I don’t play golf so let’s try a metaphor I understand: waves.

The unsexy failure is like a wave. It’s got the power to demolish you, but it doesn’t. It just taps you lightly, sometimes gets you wet, but mostly goes away.

You don’t even know anything is happening. Which is why it’s so freaking dangerous.

You don’t notice the damage a wave creates until it’s too late.

Because it’s not “damage” in the traditional sense you can immediately recognize, like “$600k in debt” or a heroin problem.

It’s a different kind of damage, one that flies under the radar and changes you sllllooowwwwlllyyyyyyyy and over a looooooooooong time.

Erosion of your confidence, your self-efficacy, your pride, your fortitude, your willingness to fight, your belief in yourself and your abilities.

Rock Bottom gives you a choice: get up or stay down. You get to be the HERO in your journey overcoming the odds. Unsexy failure lies to your brain and makes you think it’s you. You have nothing *real* to overcome. You might as well quit and go home.

It’s dangerous because it literally changes you into something you’re not (like a wave will smooth out a rock’s edges and transform it into a harmless circle) (BOOYA THE METAPHOR WORKS).

If you’re trying to avoid dying with the best still inside of you, then you gotta know the truth: No one arrives at that end on purpose.

It’s small concessions along the way, made in response to those “not real problems.”

Those concessions build up and you wake up 20 years later and somehow your life is not the one you wanted for yourself. You feel like you didn’t consent to this life. But you did – it was in how you responded to the waves.

The waves come in many forms but mostly they look like external things that cause you to draw false conclusions about who you are and what you’re capable of.

Those are the concessions to don’t even realize your making. It’s in seemingly benign things that aren’t, like:

AKA: not sexy failure.

Those are the things I want us to watch out for.

Know the difference between when life is asking you to rise up and when you’re actually not cut out for something.

If you hear yourself saying, “these aren’t real problems” then RED FLAG.

If your biggest setback is you, that’s still a worthy dilemma. FastCo might not ever want to tell your story but fuck those guys they just need eyeballs and this is your life.

Please join this list so it’s not just my mom: